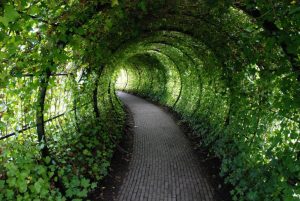 I inherited my love for gardening from my great-grandmother Clara. I lived with Clara on her “farm” in the village and I loved being in her garden with her. She would sit me down in the garden and bring me different veggies to eat. Teach me about the different vegetables in the garden and how to take care of them. She had a special affinity for growing sunflowers, and they were large, plate-size and quite gorgeous…

I don’t have as much land as she did, but I do have my own patch of backyard and I use it for my crops and trees. I am hoping I come across someone who no longer needs a greenhouse, cause I do… I could over-winter my trees in the greenhouse and have fresh citrus year-round.

I have 2 Meyer lemon trees, 1 Satsuma Orange tree, 1 Naval Orange tree, 1 LimeQuat dwarf, 1 dwarf Pomegranate, 1 Fig, 1 teenage orange tree grown from seed (so it will be some time before this one will bear fruit.

Meyer Lemon trees: I have two of the bad boys and they are easy to grow. I have names for the trees (don’t judge me!) and I will introduce you to them as they appear on the screen. Meyer lemons are the most fragrant and juicy lemons and store bought lemons just cannot compare to your own “home-grown” lemons. These trees can cost you anywhere from $20-$30 per tree, but the savings you get from never spending another $1 for ONE lemon is astounding. If you leave these trees inside your home in a sunny spot, you will have lemons growing year round. And as they are all in different growth stages, you never run out.

Citrus × meyeri, the Meyer lemon, is a citrus fruit native to China thought to be a cross between a true lemon and either a mandarin or common orange.

It was introduced to the United States in 1908 as S.P.I. #23028[1] by the agricultural explorer Frank Nicholas Meyer, an employee of the United States Department of Agriculture who collected a sample of the plant on a trip to China.[2]

The Meyer lemon is commonly grown in China in garden pots as an ornamental tree. It became popular as a food item in the United States after being rediscovered by chefs such as Alice Waters at Chez Panisse during the California Cuisine revolution at the end of the 1990s.[3][4] Popularity further climbed when Martha Stewart began featuring them in her recipes.

A virus-free selection was found in the 1950s by Don Dillon of the California company Four Winds Growers,[6] and was later certified and released in 1975 by the University of California as the ‘Improved Meyer lemon’ — Citrus × meyeri ‘Improved’.

Citrus × meyeri Improved is reasonably hardy and grows well in warm climates. They are also fairly vigorous; a tree grown from seed usually begins fruiting in four years yielding thousands of lemons. While trees produce fruit throughout the year, the majority of the crop is harvest-ready in winter.[5] Trees require adequate water, but less in the winter. For maximum yield, they should be fertilized during growing periods.

Meyer lemon tree care includes finding the right location for your tree. Whether grown in a container or planted in the ground, Meyer lemon growing requires at least six hours of sunlight. In the hottest summer areas, morning sun and afternoon shade is best for growing Meyer lemons. Start with a healthy tree, grafted onto a hardy rootstock. Seed grown trees are often unhealthy and may not reach the point of flowering or producing fruit. Soil conditions when growing these lemons should be well-draining; however, the soil must hold enough water to remain moist. Allow soil to dry out only slightly between waterings. Fertilize regularly when growing Meyer lemons. A high nitrogen fertilizer, such as one designed for citrus trees, is best fed monthly between April and September. Withhold fertilizer during autumn and winter months. Yellowing leaves indicate the need for either water or fertilizer. Prune lemon fruit clusters to one or two fruits when the little lemons are marble sized. Pruning before fruit develops, removing all but one bud in a cluster, is also an effective way to grow larger lemons.

Dwarf LimeQuat is a citrofortunella hybrid that is the result of a cross between the key lime and the kumquat, hybridized by Walter Tennyson Swingle in 1909. It is a small tree that grows into a contained bushy form. The leaves are characteristically citrus-like. The limequat produces an abundance of fruit even at a young age. The fruit is small, oval, greenish yellow and contains seeds or pips. It has a sweet tasting skin and a bitter sweet pulp that tastes similar to limes. The fruit can be eaten whole or the juice and rind can be used to flavor drinks and dishes. It has considerable amounts of vitamin C and is strongly acidic.

This plant is now grown in Japan, Israel, Spain, Malaysia, South Africa, Armenia, the United Kingdom and the United States in California, Florida, and Texas. The fruit can be found, in small quantities, during the fall and winter months in the United States, India and Japan.

My Variety:
Eustis (Citrus japonica × Citrus aurantiifolia) – Key lime crossed with round kumquat, the most common limequat. It was named after the city of Eustis, Florida.

Care:
Limequats can be grown indoors or outdoors providing the temperature stays between 10°C to 30°C (50°F to 86°F). They are fairly small and can be planted in containers or pots. Plant limequats in a well drained fertile soil. Incorporate a good compost with some gravel or other drainage-aiding substance. Sand, despite popular opinion, is poor for aiding drainage. Adding mulch or compost on top of the soil can be very beneficial. Plant anytime of the year, watering it well. Water when nearly dry and add fertilizer occasionally. It can be pruned to keep a shape.

Plants grow fairly slowly and flower and fruit between 5–7 months and rest for 7–5 months.

Limequats are more cold hardy than limes but less cold-hardy than kumquats.